My husband has always been interested in how they make maple syrup. Over the last few months, he has studied how they do it up north and the type of maple trees that can be used.

During the hunting season, he identified several trees that could be tapped to gather the maple sap. The type of trees that he discovered that grow here in Georgia was a cousin of the northern sugar maple. The tree's name is Florida Maple aka Acer barbatum. It grows naturally in Georgia.

For Christmas all he wanted was the equipment to gather and make maple syrup. He was able to find a place up in Wisconsin that sells used taps and buckets. The taps are what are driven into the trunk of the tree to extract the sap. This can only be done when the high temperatures are in the 4o's and the lows are 32 or below.

Two weeks ago the conditions were just right to gather the sap so he went down to the woods and inserted the taps into the trees and attached the metal buckets to collect the sap. He was expecting that it would take several weeks to gather enough sap to make it worthwhile to boil down and make syrup. To his surprise within less than a week he had over 12 gallons of sap ready to be processed. (This meant that we had maple sap in our freezer, refrigerator and our spare refrigerator.) Since he worked most of the week, he had to go down into the woods in the dark to check his maple buckets. He said it was hard work carrying 5 gallon buckets out of the woods in the dark with only a flashlight.

Last Sunday, he decided he had enough to begin the boiling down process. He had bought lids to go on pint glass jars that I had bought years ago thinking I would can. He also bought a kit to help him in the canning process. He began the slow processes by using my turkey roasting pan on the grill and slowly adding sap to the pan as it evaporated the water from the sap. He was at this all day on Sunday for about eight hours. He still had more sap to boil down which he did on Monday. 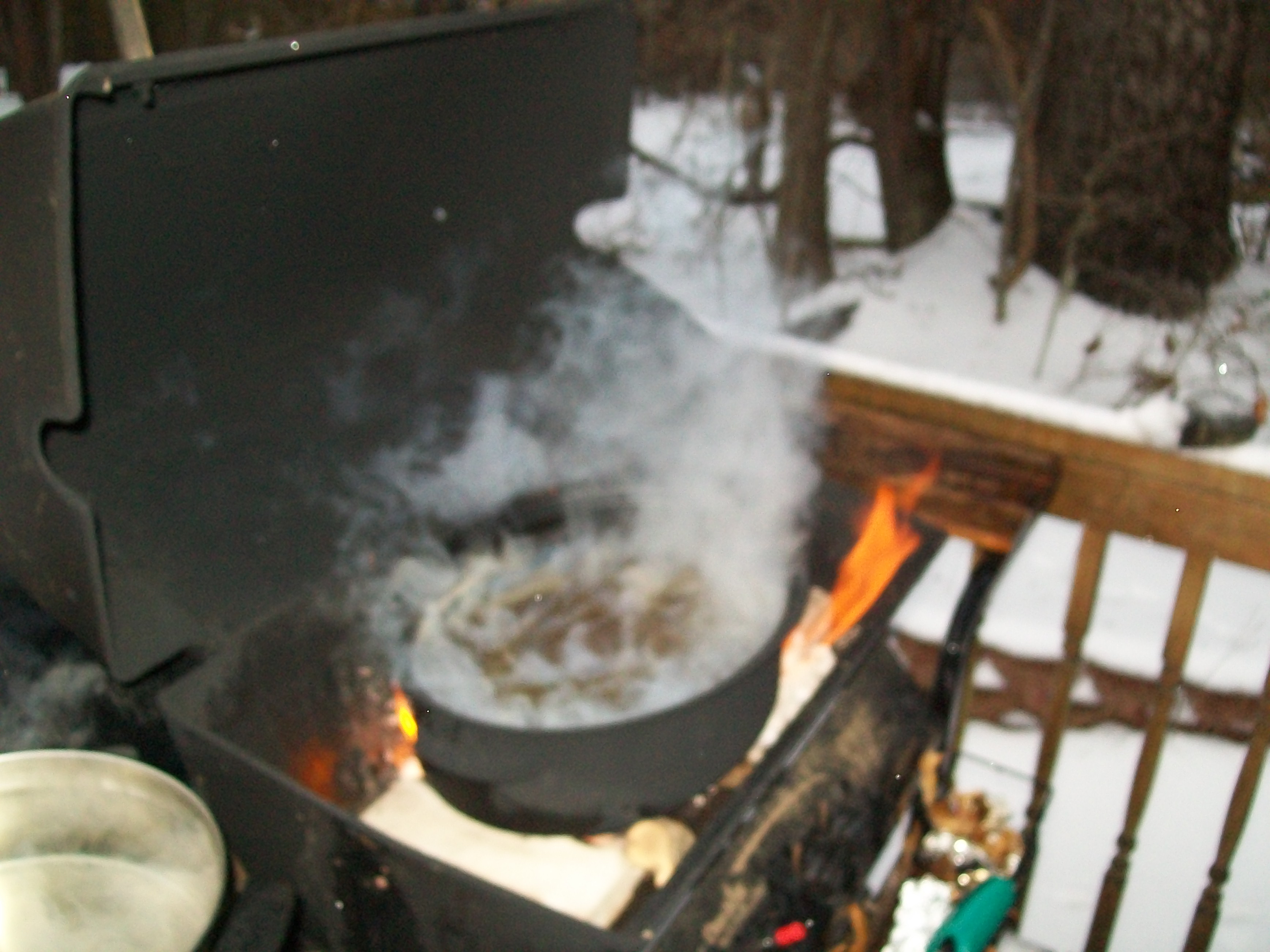 It took longer than usual to boil down the contents on Monday because of a snow/ice storm that hit the Atlanta area. As the quantity began to get reduced he started to boil some of the sap inside the house on the stove. The one problem was that it build steam up into the house so he had to open up the doors and windows to let the steam out. The positive out of this process was that the whole house smelled like maple syrup, mmm...

Finally, around four o'clock that afternoon, he was ready to add the syrup into the hot Ball jars to store them for future use. (You have to boil the jars to sterilize them and get the ready to seal the lids.) The final product yielded a little less than three-quarters of a quart. The sap is mostly water so it takes approximately 40 times the amount of sap to produce syrup. 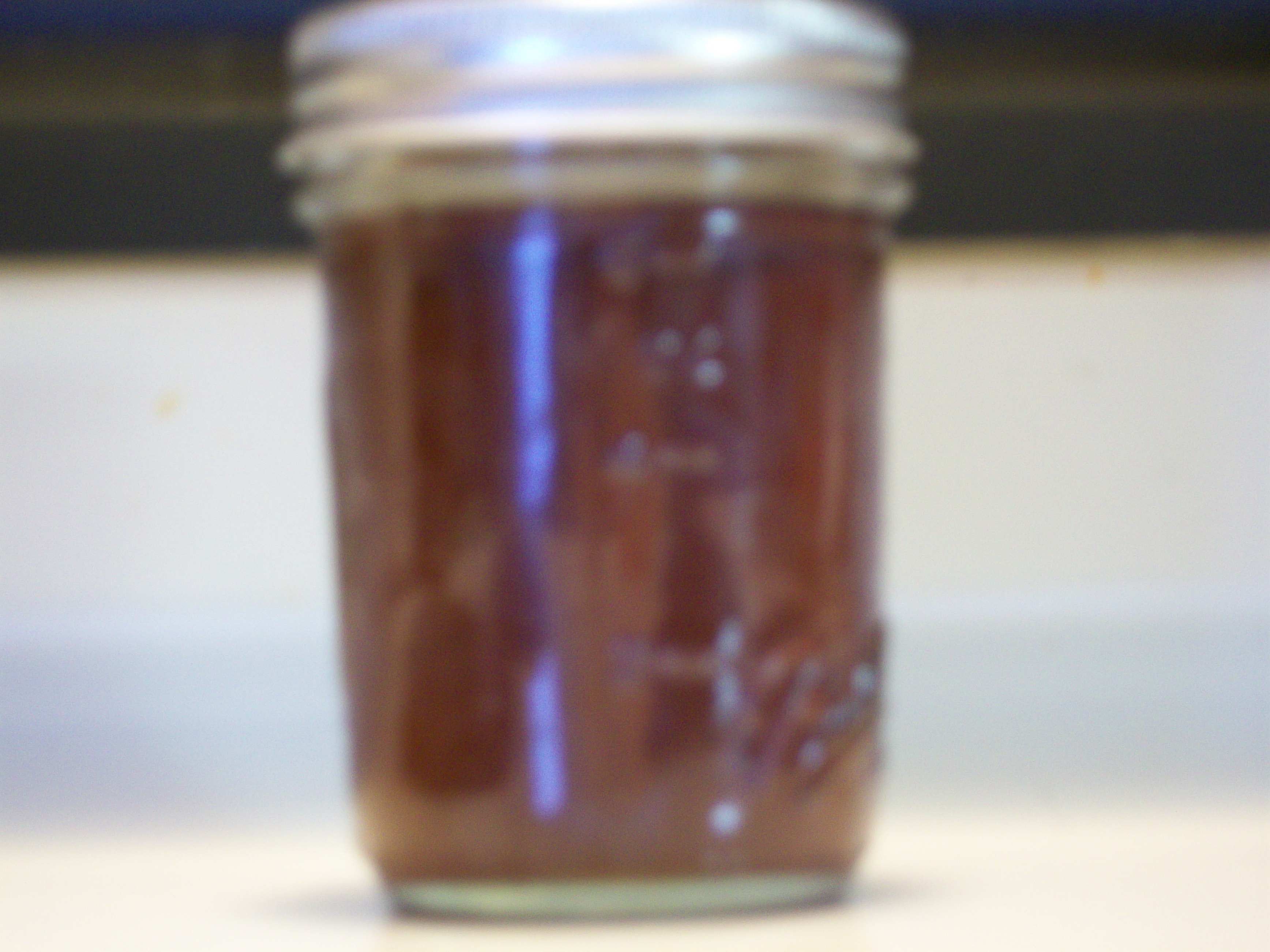 Was this experiment a success? I think so for several reasons. My husband was able to actually make syrup. It was a little thinner than what you can buy in the store but that could have been because we should have let it boil down a little longer. It was good tasting syrup. It was another thing that you can say that I made myself like they used to do back in the days of old.

It was not a success if we were looking to save money. The time it took to gather the sap, boil it down and bottle it took probably a total of almost two days of time. The yield was not very great. When many people heard what my husband was doing they asked if they could have some. There really wasn't much to share on what was the final product. The verdict is still out if this will be something he will do next year. For this year, he is going to try one more time and see if he can make it any easier on himself. Time will only tell if this will become a hobby or just an experiment.