Is maple syrup good for you? This is an important question a lot of researchers around the world are looking into. Find below a small piece of the iceberg, regarding the benefits of maple syrup.

Pure Quebec maple syrup is 100% natural and contains multiple vitamins and minerals, including polyphenols. Did you know that pure maple syrup is a great natural source of energy? In fact, due to its impressive nutritional profile, more and more athletes favour maple syrup in their diets.

In 2020, the internet went crazy when Vasek Pospisil, the Canadian professional tennis player, was casually sipping maple syrup during the Open Sud de France tournament. In September 2021, during her post-match interview, another great Canadian tennis player, Leylah Fernandez, was asked her secret to give such incredible and inspiring tennis performances during the US Open Tennis Championship, and she responded with confidence that it was the Canadian maple syrup who was behind her success. There’s also Hugo Houle, the professional cyclist from Quebec, who is a proud ambassador of Quebec maple syrup and includes it in his pro-cycling diet every day. 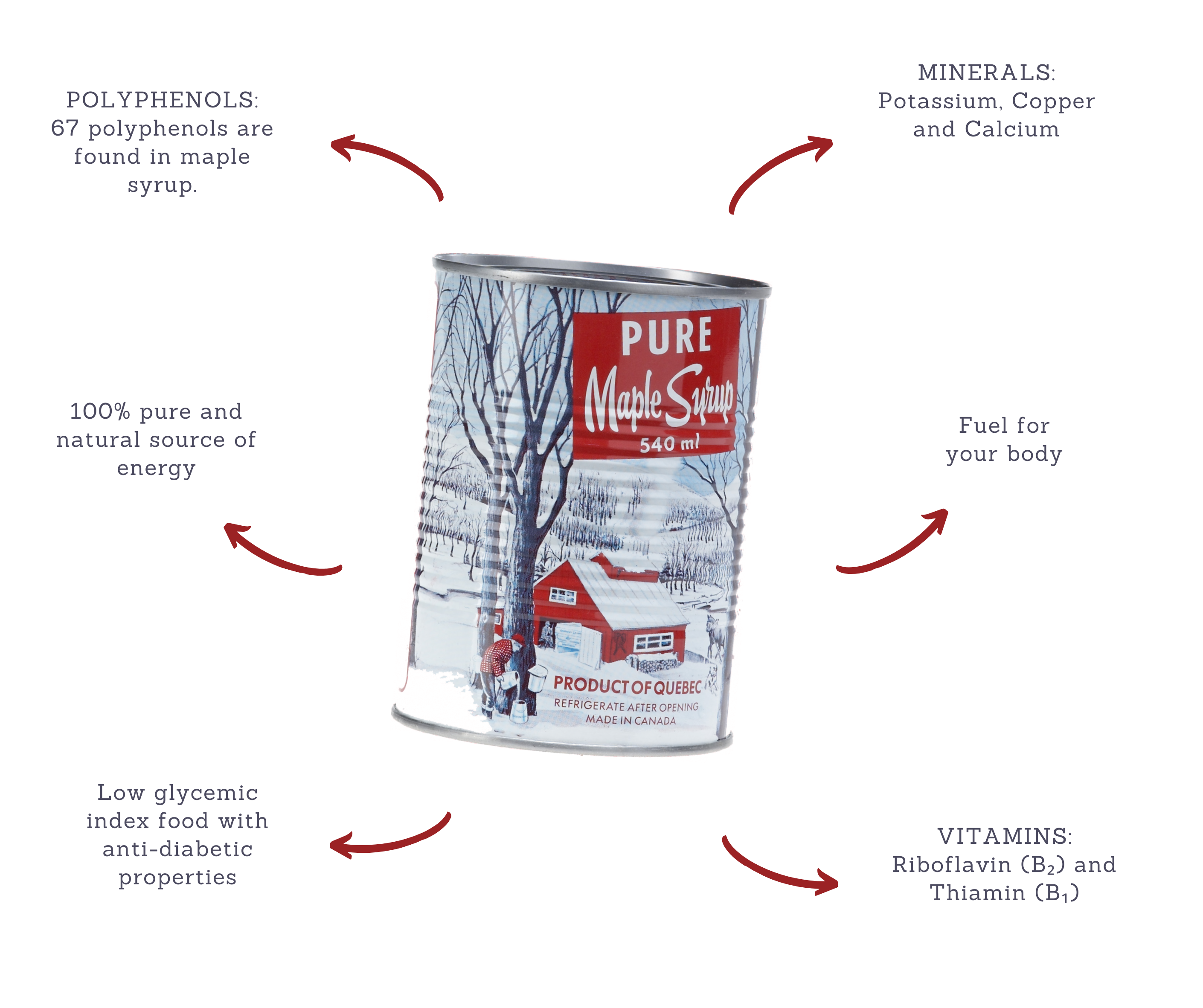 Fuel for your body

So, what is it with maple syrup? According to Maple from Canada, maple syrup is a great source of energy for athletes because “it provides simple carbohydrates that easily convert to glucose and act as fuel before, during or/and after their physical efforts’’. To be specific, according to that same source, “one 60 ml (1/4 cup) serving of maple syrup naturally contains 72% of the daily nutritional requirement of manganese, 27% of riboflavin, 17% of copper, and 6% of calcium’’ which unequivocally makes maple syrup a good sugar. In comparison, white granulated sugar provides no significant vitamins and minerals. Find below the nutritional facts of maple syrup. 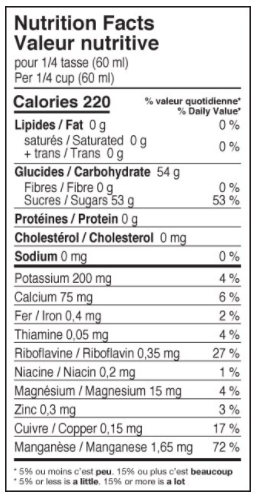 As mentioned before, maple syrup also contains polyphenols, which are known for their antioxidant properties; the same antioxidant properties that make maple syrup a low glycemic index food. Polyphenols are micronutrients, known as phytochemicals, meaning that they are naturally found in plants. Not only are they powerful antioxidants, but polyphenols are also known to reduce oxidative stress, which improves heart health, raises the immunity system, and lowers risks of type 2 diabetes.

In total, there are 67 different polyphenols found in 100% pure Quebec maple syrup, and that is why, amongst other things, maple syrup’s anti-diabetic properties are arousing such interest. In 2011, medicinal plant researcher, Navindra Seeram, notably said that ''maple syrup is becoming a champion food when it comes to the number and variety of beneficial compounds found in it'' (Science Daily; Mar. 30, 2011), and we couldn’t agree more.

While respecting their meal plan, a person with diabetes can replace other sugars with maple syrup, to simply sweeten better. However, maple syrup remains a food that should be eaten in limited quantities, because even though it has many properties, it remains sugar. The moderate consumption of sugar is key to good health.

Maple syrup is a fascinating product. Much more research is in the work regarding it, and we can’t wait to know more. One study, made by the University of Rhode Island, even suggests “the potential neuroprotective effects of maple syrup against Alzheimer’s disease and amyotrophic lateral sclerosis” (UNIV. OF RHODE, 2019), which is very interesting. Separate research also confirms that “maple syrup extract mitigates hepatic inflammation induced by a high-fat diet” (UNIV. OF TOKYO, 2015, 79 (11): 1893-1897). While another research proves that, “when given to healthy rats, maple syrup produced significantly lower peak and global responses of serum glucose, insulin and gastric inhibitory polypeptide as compared to other sweeteners, which confirms maple syrup is a healthy natural alternative to various sweetener options” (UNIV. OF LAVAL, QUÉBEC, 2014; 11:460-471). And so on. If you’re interested in this subject, you can visit https://maplescience.org/research/ to know more; you’ll find a lot of information on that page.

In light of this information, maple syrup is undeniably a healthier sugar, that you should privilege in your diet. Not only it is versatile and delicious but, when eaten in moderation, its consumption is both recommended by nutritionists and backed by science. Maple syrup is truly an incredible product, and we count ourselves lucky to be part of its story. It’s one of the great treasures of Canada!