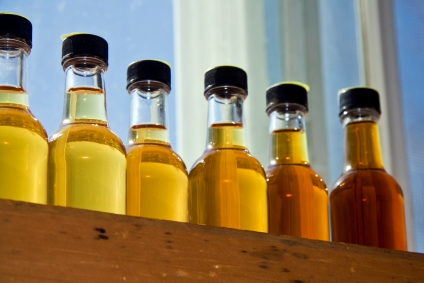 Maple Syrup is made from sap collected from maple trees during the sugaring season which starts around mid-February and last until April (depending on region, climate and elevation). The trees need to be at least 30 to 40 years old before they can sustain growth and being tapped simultaneously.  Early season maple syrup tend to be clear and light in taste.  As the season advanced, it becomes darker and more caramelized in flavor.

Maple syrup’s flavor starts blossoming during the evaporation process.  All the taste precursors are contained within the maple sap.  The maple sap is composed of water, minerals, various sugars as well as organic acids, nitrogen compounds and, similarly to red wine, phenolic compounds and flavonoids. The composition of the maple saps changes during the sugaring season, throughout the years and varies from tree to tree and region to region.  This is the reason why some regions are considered the paradise of maple syrup and tend to produce maple syrup with a more rounded and elaborate bouquet.

The sugars present in the maple sap play a crucial role in initiating the caramelization reaction and the Maillard reaction as the water is evaporating.  The caramelization is the oxidation of sugar; a process used extensively in cooking which result in a nutty flavor and brown color. As the process occurs, volatile chemicals are released, producing the characteristic caramel flavor.  The Maillard reaction is a chemical reaction between an amino acid and a reducing sugar both present in maple syrup sap, usually requiring heat. It is vitally important in the preparation or presentation of many types of food.  Maillard reaction is the process that gives bread, croissants and brioche a brown crust.  Furthermore, with the heat effect, phenols such as vanillin and coniferol are released within the sap and create the rich and complex maple syrup perfume.

Maple syrup share many similarities with wine; not only by the presence of phenolic compounds and flavonoids but also in the variety of present flavors and the diversity of the terminology involved in describing its taste.  Here is a list of different terms which compose the wide spectrum of maple syrup terminology:

There is 3 degrees of roasted flavor present in maple syrup.  Light, medium and strong.  A light roasted flavor could be described as golden sugar, chicory or toast.  For a medium flavor, you could use cooked sugar, caramelized, burnt wood, ground coffee, brown coffee bean or chocolate.  And for a strong roasted flavor you would say burnt sugar, ground black coffee, black coffee bean, smoked.

Confectionery flavors are related to the sugariness of the maple syrup.  There is a light confectionery linked with white sugar.  A medium confectionery would be linked with terms such as corn syrup or light brown sugar.  For a strong confectionery flavor, dark brown sugar, molasses and sponge toffee are adequate.
Maple, a dominant flavor
This one is easier to characterize as you can say light, medium and strong maple flavour or a roasted dandelion root flavor.  It is more difficult to define this dominant flavor as quite often maple syrup will be blended to achieve a consistent maple flavor.

Even though they are considered dominants flavors, you need a good tasting sense to be able to characterize both these flavors as they can be more subtle.  Woody flavors are generally linked with type of wood: Firewood, wet wood or softwood.  Vanilla is a bit easier to characterize as you could say it has a strong vanilla flavor or go with a light Marshmallow flavor.

This is where the expect can really shine, you need a bit more experience or great smell and taste to be able to pinpoint accurately minor flavors but they are present in maple syrup and if you take the time to taste properly, you definitely will be able to get a glimpse of them.  Take your time, don’t stress and let the maple syrup perfume invade your senses, you’ll get some surprise!

How to taste maple syrup

The tasting method for maple syrup is quite similar to wine.  We recommend the 5 “S” technique: See, Swirl, Smell, Sip, Savor.

But more importantly than all these steps, enjoy, have fun tasting it and share with your friends!

Beware of maple syrup imitation, they might cost less but they are made with cheaper ingredients and do not taste anything like the real thing.   Maple-flavored syrups are usually made with high-fructose corn syrup.  They have no genuine maple content, or very little, and are usually thickened far beyond the normal viscosity of real maple syrup. Would you drink wine imitation or eat chocolate imitation?