The Comfort Maple – an Ancient and Amazing Grace 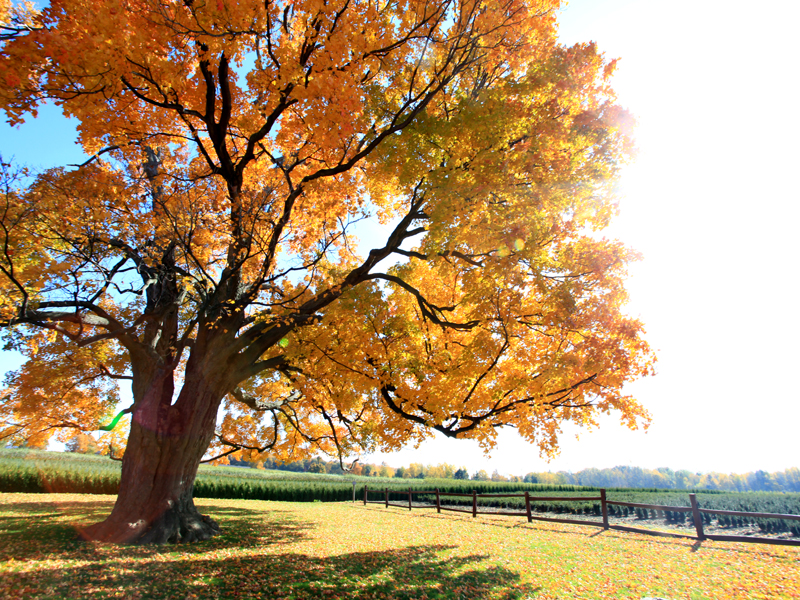 Over five centuries ago, not long after Christopher Columbus first made landfall in the western hemisphere, and roughly one hundred years before the Spanish established their first settlement in Santa Fe, before the French arrived in Quebec, and before the English set foot in Jamestown, deep in a vast and primordial forest, a small seedling began to secure itself into the ancient and ageless soil. After enduring a few years of seasonal evolution, adjusting to both the abundance and harshness of the higher latitudes of the North American climate, a sapling now stood, and firmly rooted in its place among the surrounding flora and fauna of its time.

As the decades moved inevitably onward, the sapling would stoically and defiantly stare down the ravages of innumerable storms and droughts, blizzards and blights, and the occasional horror of forest fires. By the vagaries of chance, and the sheer twist and turns of Fate itself, as the encroachment of humanity’s hunger for land and timber grew during the colonization of the new world, it would even be spared the insatiable blade of the woodsman’s axe. And as if blessed by the kindness of Nature’s abundant hand, the sapling’s determination became a testament to fortitude and resolve, growing well, and growing strong, and defying all the odds.

Today, and viewing the world from the twenty-first century, the once and future sapling is still standing, quite tall, and certainly quite proud, and considered to be one of the oldest, if not the oldest, of all the Sugar Maple Trees to grace the landscapes of Canada. It occupies the hallowed ground of what is known as the Niagara Peninsula Conservation Area, and stands at the end of a narrow dirt track that winds its way through the farm country of a town called North Pelham, Ontario. The tree even bears a name of course, though three centuries had passed before its christening, and is just as securely rooted in the history books as it is in the hearts and minds of those who gaze upon it, and is fondly referred to as The Comfort Maple.

This amazing tree, growing adjacent to several other sugar maples, which are indeed dwarfed by its stunning immensity, now soars to an impressive height of over 80 feet, bearing a canopy of over 125 feet, and with a trunk circumference of over 20 feet. It is named after the Comfort family, who purchased the land in the year of 1816, shortly after the end of the War of 1812. According to local legend, the Comfort Maple is also the site of an ancient Native American burial ground, and therefore embodies the spirits of a people long vanished from the pages of history.

A rustic wooden sign, posted within the tree’s protected compound, notifies all visitors that a Miss Edna Eleanor Comfort had donated the tree and the grounds beneath it to the NPCA ‘for its preservation’ on April 30, of 1961. It is lovingly dedicated to the memory of Earl Hampton Comfort, who had reserved the quarter-acre plot of land for the tree’s everlasting protection back in 1946.

There is no greater nor more fitting tribute to this magnificent, arboreal splendor than the final words etched into the sign, to honor the Architect of such awe-inspiring creations:

“O Lord, how glorious are thy works.”