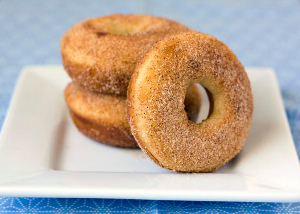 Taste: These donuts have a lovely warm sweetness thanks to the cinnamon and maple, unlike some donuts (cough, Krispy Kreme, cough) that just taste sickly sweet.
Texture: Despite being baked from a batter, these donuts still manage to be light and fluffy with small, airy holes.
Ease: VERY simple, much more simple than even the first step of any yeast-based donut recipe that requires deep frying.
Appearance: Who doesn't love food that is geometrically perfect and sparkling with sugar?
Pros: Way easier, healthier, and just as tasty as fried donuts.
Cons: They are best eaten the day they are baked, so no leftovers. Also, I would have liked the maple flavor to be stronger.
Would I make this again? I've already made these donuts twice!